Nayr Odyssey is my submission to 7DRL 2020, a game jam where you make a roguelike in seven days. For my submission I was inspired by the 1974 television series Space Battleship Yamato, where the protagonists go on a cosmic voyage to a distant planet.

Browsers prevent audio from playing without a mouse click, so you should click on the game screen if you intend to play! Otherwise when you do, the sounds might all play at once a little later and that can be jarring.

Nayr Odyssey sadly came out a bit complicated for a beginner at times. I've written a quick primer on how to play below. I hope this helps get you up to speed and enjoy the game!

Goal of the Game 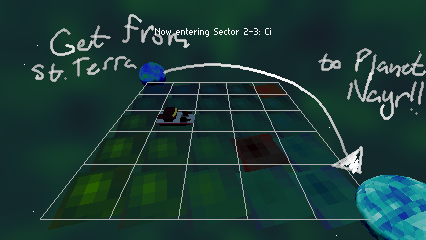 The goal of Nayr Odyssey is to deliver the Planet Shield to the distant Planet Nayr, which is under blockade by the evil Yaralon Empire. You're the captain of the Arlo Mk IV and your job is to direct the crew to get there. The Arlo Mk IV starts in Sector 1-1 and Planet Nayr is in the opposite (southeast) sector. You'll spend most of your time navigating from sector to sector and fighting off Yaralons. 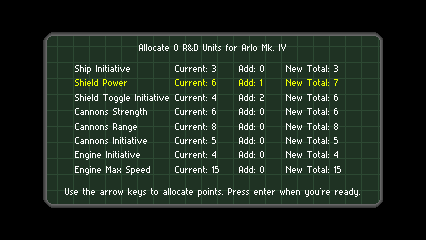 The first thing you'll do when starting a new game is allocating R&D points towards various traits of the Arlo Mk IV. (your ship). At first you'll only be able to allocate three, but as time goes on you'll be able to set more. Once you've allocated them all (or chosen not to!) you should be ready to start the game. Spending in each category yields the following:

From time to time your cannons operator will check if there are any enemies within range. If there are when her turn comes up, she'll ask if you want to attack. You can press the 0 key to avoid attacking, or the 1/2/3/... key for each target. See the section below for help discerning targets. 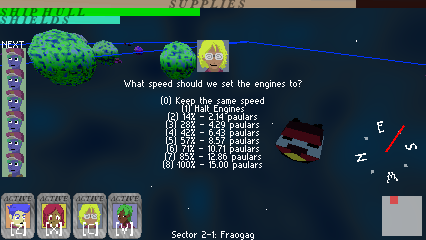 From time to time your engineer will ask if you want to adjust how far the Arlo Mk IV moves in a turn. You can keep the same speed by pressing the 0 key, halt the engines by pressing the 1 key, or the 2/3/... keys for another variable speed.

Different speeds are useful in different situations, such as trying to orbit a planet or stay in attack range while moving.

From time to time your shields operator will ask if you want to raise the shields. You can press the Y or N keys to accept or reject their offer. While the shields are up they'll absorb damage, but they'll slowly deplete over time. Once the shields are back down they'll continue recharging. Shields are essential not to get destroyed by later enemies.

There will be a lot of times when you'll not want to take any action from specific crew members (eg: staying on course for an entire sector or keeping the shields on while you're in combat). You can click to toggle each crew member's notifications on and off and they'll "do nothing" when their turn comes up. Be warned though, if they miss their turn when sleeping you'll have to wait until they come back up and that can be life-or-death. The Z/X/C/V keys also work as well.

You can move your mouse over entities in the sector to view more information on them such as attack range, shields, etc. There is also a turn order on the left-hand side of the screen that can be mouse-overed as well if you want to see who moves next.

As you progress towards Planet Nayr, your supplies will slowly deplete. Don't let them go to zero!!! If you do, then the game will be over. You can get more supplies, by going into orbit...

Some planets can be orbited. If you're within orbit range your skipper will ask on his turn. If you do your ship hull will begin repairs. Planets often have free supplies too, so be sure to orbit often. Taking advantage of an orbit is a good way to turn around. 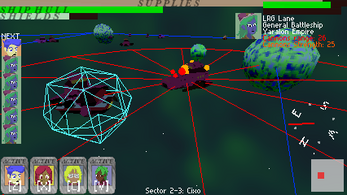 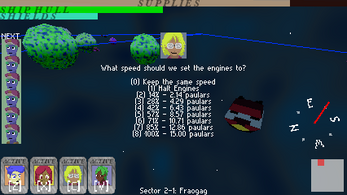 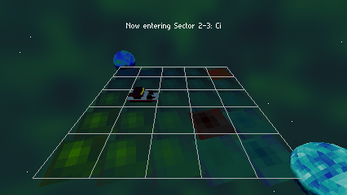